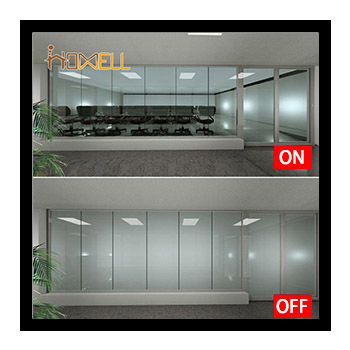 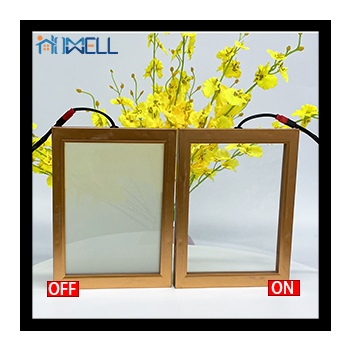 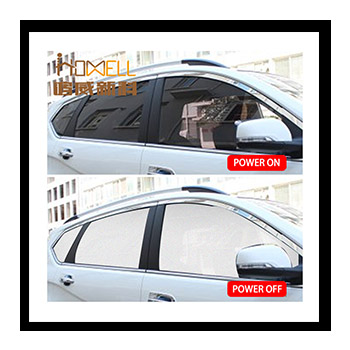 HOMEWELL  Switchable Transparent Glass , refered to as STG, this product is made by the dry process of gluing glass, and the switchable transparent film(STF) is glued between two pieces of glass. The glass meets the national standard for laminated standard.

The main indicator of the advantages and disadvantages of STG glass optical performance is transparency. In fact, it is the haze. The smaller thaze when energized, the better haze when the power is cut off. When the external electric field is applied, the light is perpendicular to the direction of the transparent conductive film. When incident, although nLC is approximately equal to no, However, due to the difference between the nP and no values, scattering still occurs at the interface between liquid crystal droplets and polymers. This is the main reason for the haze.

When the ITO film is power on, Angle between incident light and the vertical direction of the electric control film is not zero(Called the view angle “a”) The direction of light propagation in the STF is not parallel to the liquid crystal molecule pointing vector, as shown in the figure:At the interface between liquid crystal droplets and polymers, the component of light vibrating along the NE direction is scattered, and the larger a is, the more scattered, so the mist increases with the increase of the angle of view, which is the characteristic of the photoelectric effect of liquid crystal.

b)High UV resistance function, It can block more than 99 % of ultraviolet light. While it does not lose visible light into the room, it isolates a large amount of ultraviolet light to prevent the fading and aging of interior decorations and furniture. It can also protect people from diseases caused by excessive ultraviolet radiation

g) A high degree of safety, when damaged by external forces, will only cause cracks, but will not break down, there is no danger of splashing glass fragments.

h) The privacy protection is transparent when energized, opaque when the power is cut off, light is still abundant under the protection of privacy, and the reception room in the hidden office area is still bright, not only comfortable, but also saving lighting.

i) Sound insulation features excellent reflection, heat absorption type hollow glass, the middle electric control film and film have sound damping effect, can effectively block all kinds of noise up to 38 decibels, plus hollow, sound insulation effect is even better

j) Projection characteristics: Under the closed state, visible light scattering reaches more than 43 %, and the penetration rate reaches more than 50 %. It can be used as a projection screen in a street mall, playing a good advertising effect. If the projection is in the open state, there is also a three-dimensional ethereal effect

We are professional supplier and manufacturer of decorative window film.